This entry is part 26 of 37 in the series Focus Guide - BFA: Budget/Forecasting/Analysis Worksheet

System Administrators (and anyone with PART | Can Customize BFA Settings (RS) role capability) can set site-specific settings for the BFA workbook that are then used instead of Spitfire defaults. Local (specific workstation) settings are always loaded last using either the Spitfire or site defaults as starting points.

To open the Setup worksheet for site settings:

To make changes on the Setup worksheet on the site level:

Note: Any columns that have been made inactive will ignore these settings.

Spitfire-default column descriptions fill the Default Headings (shown above in yellow). These descriptions also fill the Title cells (shown in green) until you make changes.

You can indicate the order of columns on the Data worksheet by changing the Location numbers on the Setup worksheet. You can also make a column inactive by changing its location to 0 (zero).

On all modes of the BFA, certain columns are required. Those columns are indicated by a light yellow background (as shown above). You should ensure that all such columns have a location number. You can indicate which columns are visible for each mode in the Mode Selection area, but if you do not give all mandatory columns a location number, you will see the following message when you save: 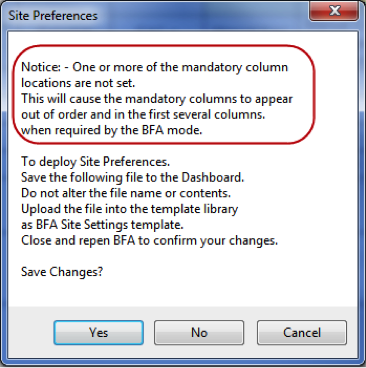 Changes to the order of columns apply to all modes of BFA – all modes use the same column order, although different columns can be visible/hidden on each of the modes.

To reorder the Data worksheet columns:

All columns on the Data worksheet have a default width, which you can change.
To change the width of one or more columns, type new widths in the Width row. The widths are in the Microsoft Excel unit of measure.

The text or numbers in the Data worksheet cells can be aligned to the left, center, or right.
To change the alignment of one or more columns, select new alignments from the drop-down menu on the Alignment row.

Mode Selection
You can indicate which columns will be visible in which modes.

To indicate in which modes a column should be visible/hidden, select Y (visible) or N (hidden) from the drop-down menu.

User Calc Field Columns (Site)
If you scroll to the right on the Setup worksheet, you will find ten possible user-defined calculation columns (initially called UCF 1 through UCF 5). These columns can hold formulas and create data not elsewhere on the Data worksheet. Aside from changing the title, location, width and alignment of these columns (as described previously) you can specify a format and formula for each of these columns, as necessary and—if using a Division Totals or Billing Code Totals worksheet—a subtotal handling code.

To select a format for a User Calc Field column:

Formula
To indicate a formula for a User Calc Field column:

Note: You can use F3 while in the User Calc Field cell to open a Defined Names pop-up list. Selecting Defined Names for your formula is recommended—while direct references to a cell like “B3” will work, the probability of error when filters, sorts, and column visibility are applied to the data is great. 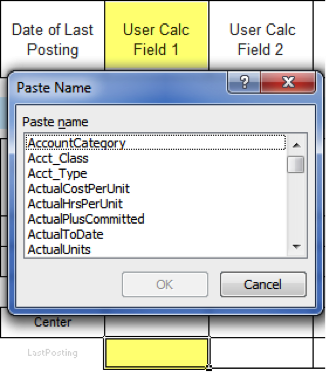 To indicate that totals should sum by Cost Code:

Subtotal Row Handling
If you want to use any of the User Calc Field columns in your Division Totals or Billing Code Totals worksheet, you should indicate how subtotal rows are to be handled on those columns—whether the subtotal row should sum its constituent amounts, should use a formula, or should remain blank. During the initial creation of the Division Totals or Billing Code Totals worksheet, User Calc Field formulas are reviewed and converted for use in the associated worksheet. The conversion remains in place during the session of BFA or until the user makes changes to the Setup data. If a formula would return invalid results, that User Calc Field column is treated as N for none (blank). 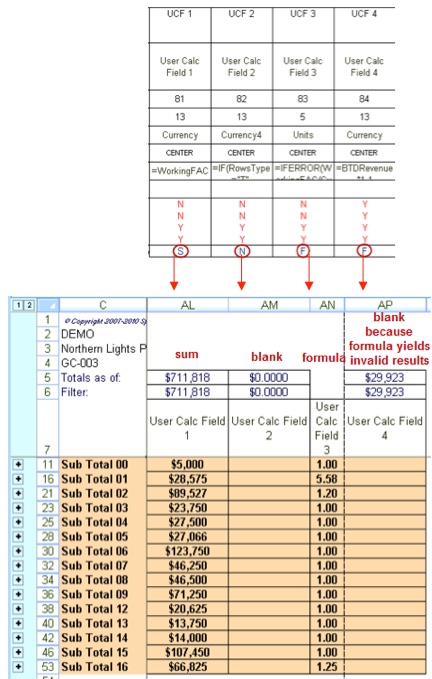