Sometimes the Current Contract amount on a project’s Key Performance Indicator part (KPI) is not the same as the Revenue amount on the Cost Analysis Detail part (CAD). Why might that be? Where do these numbers come from?

Those two numbers do come from two different sources. If your company thinks they should always be the same, then your site should be set up to have those numbers start out the same and you should understand what can make them end up different.

The KPI’s Original Contract amount comes from the Project Setup document, once the document is Committed. If there are any approved Change Orders (Owner Change Orders) on the project, the amount of the Change Order(s) is listed as Posted CO and the new total is listed as Current Contract. 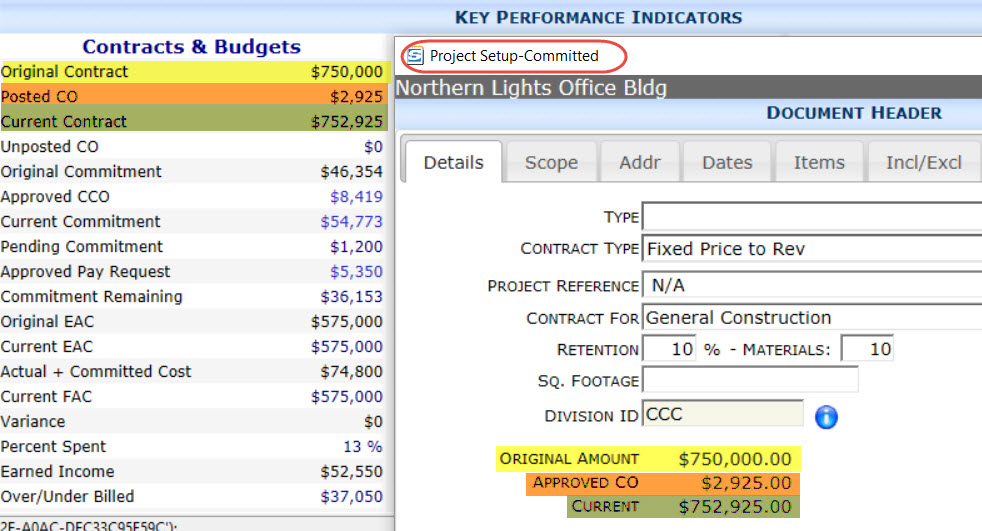 The Revenue amount listed on the Cost Analysis Details comes from the project’s budget. When the Initial Budget is entered for the project, it may or may not include a Revenue line.

In any case, the revenue amount on your project’s BFA workbook will show up in the Cost Analysis Details. When a Change Order changes that revenue amount, the system (by default) creates a budget revision, which is reflected on the BFA:

If your Project Setup’s Contract amount and your BFA’s Revenue match from the beginning, Change Orders will change both amounts equally and your KPI and CAD numbers will match up.

What Can Cause the Amounts to No Longer Be the Same?

The Budget Revision History report can help you determine what changed amounts in your budget.